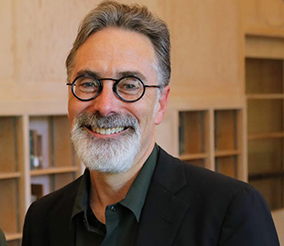 "Popular Modernism in the Late Krazy Kat Comics: Industry and Innovation in the Color Sundays," Journal of Modern Periodical Studies 9.2 (2018)

"Thinking Race in the Avant guerre: Typological Negotiations in Ford and Stein," Yale Journal of Criticism 10.2 (1997)

"Surrounded by a multitude of other Blasts: Vorticism and the Great War," Modernism/Modernity 4.2 (April 1997)

An award-winning teacher and scholar of Anglo-American modernisms, Paul Peppis is Professor of English and Director of the Oregon Humanities Center. His work examines relations between early twentieth-century literature and life, theory and practice, and assumes that research and teaching can integrate these allegedly incompatible realms. His scholarship studies early twentieth-century literary works and cultural productions to reassess modernism's diverse engagements with the social, political, scientific, and popular movements of its time. He is currently working on a book project, tentatively titled "Popular Modernisms," which studies a selection of early twentieth-century popular cultural products that work from inside particular popular cultural media and genres to make them new.

Sciences of Modernism examines key points of contact between British literature and the human sciences of ethnography, sexology, and psychology at the dawn of the twentieth century. The book is divided into sections that pair exemplary scientific texts from the period with literary ones, charting numerous collaborations and competitions occurring between science and early modernist... Read more

Literature, Politics, and the English Avant-Garde