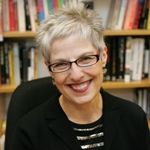 Author of The Unruly Woman: Gender and the Genres of Laughter, 1995, co-winner of the American Culture/Popular Culture Association's 1996 Emily Toth Award, and Unruly Girls, Unrepentant Mothers: Redefining Feminism on Screen, 2011.  "Roseanne: Unruly Woman as Domestic Goddess," Screen 31.4 (1990). Other articles in The Journal of Film and Video, Jump Cut, The Quarterly Review of Film and Video, Genders, and various anthologies in the areas of film studies, television studies, cultural studies, comedy and feminism.

Interests include film studies and cultural studies, with an emphasis on film history, genre studies, and feminist theory.

Unruly Girls, Unrepentant Mothers, a companion to Karlyn’s The Unruly Woman (1995), studies how popular culture and contemporary feminism inform each other.   It asks whether today’s seemingly materialistic and apolitical girls have turned their backs on the feminism of their mothers or are redefining unruliness for a new age.

In her book The Unruly Woman, Kathleen Karlyn explores how the unruly woman, often a voluptuous, noisy joke-making rebel or “woman on top”, uses humor and excess to undermine patriarchal norms and authority.