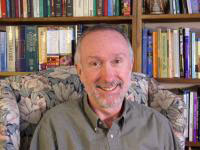 Publications include Thinking About Beowulf, Stanford Press, 1994; "Prophecy and Parable in Medieval Apocalyptic History," Religion and Literature , 1998; "Violence and Non-Violence in Anglo-Saxon England," PQ 1999; "Beowulf and the Origins of Civilization" and "Reading Beowulf with Original Eyes," in The Postmodern Beowulf, West Va. U. Press, 2007; "How to Read an Indian Novel," Literary Imagination, 2007; "The Forbidden Beowulf," PMLA 2010; and Beginning the Mahabharata, SASA Books, 2012.

Interests include Ancient and Medieval literature, the Bible, Anglo-Saxon literature and culture, psychoanalytic criticism, and the literature of India

Anyone wanting to read the Mahābhārata in English will find no helpful guidance in print, and helpful guidance is definitely needed. The epic opens with a set of frame stories that the most recent translator calls “frankly confusing, even bewildering.” Earl guides the reader through the opening 56 chapters, analyzing the epic’s major themes and narrative strategies along the way. This is the... Read more