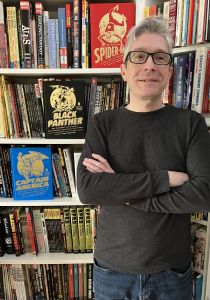 Do The Gods Wear Capes: Spirituality, Fantasy, and Superheroes, Continuum, 2011.

Professor Saunders has also written about music and comics at the pop-culture website, The Hooded Utilitarian. Visit http://www.hoodedutilitarian.com/tag/ben-saunders/ for a complete list of his online writings.

Ben Saunders specializes in two fields: the literature of the English Renaissance, and the history of British and American comics and cartoons.  His first book, Desiring Donne, explored the intersection of spirituality and sexuality in the poetry of John Donne alongside larger questions of literary theory and hermeneutics.  Desiring Donne was shortlisted by Choice magazine as an "Outstanding Academic Title" of 2006 and selected as a Finalist for the Oregon Book Award that same year.  His second book, Do The Gods Wear Capes?, focused on modern American superhero comics—arguing that superhero fantasies can tell us a great deal about about our conceptions of the human, the post-human, and the divine.  Do The Gods Wear Capes has been widely cited in both academic contexts and mainstream journalism; the "groundbreaking" chapter on bondage imagery in Wonder Woman comics is often singled out for particular praise. Saunders has also written numerous free-standing scholarly articles on a variety of topics, from the plays of Shakespeare to the Peanuts comics of Charles Schulz, and co-edited a collection of essays on popular music (Rock Over The Edge, with Roger Beebe and Denise Fulbrook).

Since 2009, Saunders has expanded his scholarly portfolio to include extensive curatorial work. He has produced three major comic art exhibitions for the Jordan Schnitzer Museum of Art at the UO, including a massive tribute to EC comics; and in 2015 he collaborated with Professor Charles Hatfield of CSUN on the largest retrospective exhibition to date on the work of Jack Kirby. (Hatfield and Saunders also co-edited the accompanying catalog/critical anthology, Comic Book Apocalypse, featuring appreciative essays on Kirby by a diverse group of comic-artists, filmmakers, writers, and scholars.)

In 2018, Saunders served as chief curator for "Marvel: Universe of Superheroes"—a fully immersive multi-media exhibition devoted to Marvel Comics, Cinema, and Television. The show opened at the Museum of Pop Culture (MoPOP) in Seattle to glowing reviews, subsequently transferring to the Franklin Institute in Philadelphia to similar acclaim—with additional venues (both national and international) to be announced.

An award-winning teacher, Saunders founded and currently directs the University of Oregon Undergraduate Minor in Comics and Cartoon Studies (the first undergraduate minor of its kind in the country). His other teaching and research interests include contemporary literary theory, queer theory, Anglo-American poetry and poetics, and twentieth-century popular music. He used to moonlight occasionally as an actor and musician, and he still enjoys singing with friends and family when the opportunity arises.

Professor Saunders has lectured at universities and academic conferences around the world and is a frequent speaker at comic-book conventions across the United States.  In 2011 he served as a judge for the Eisner Awards (the comic-book industry Oscars) and in 2012 he was a Special Guest at the San Diego Comic Con.  He is frequently interviewed on radio, television, and for podcasts about matters related to comics culture, and also appears as a talking head in the History Channel documentary, Superheroes Decoded.

To reach him with regard to an interview or speaking engagement, please send a detailed email to the address above.

An illustrated critical anthology on the life and work of one of the most influential and prolific comic book artists of the 20th century—Jack Kirby—co-creator of Captain America, The Fantastic Four, The Incredible Hulk, The X-Men, The Mighty Thor, The New Gods, The Eternals, and numerous others.

Do The Gods Wear Capes: Spirituality, Fantasy, and Superheroes

This groundbreaking work does not rehash the tediously familiar claim that superheroes constitute some kind of "modern mythology." Instead, through a series of close readings of the comic book adventures of four major heroes—Superman, Wonder Woman, Spider-Man, and Iron Man—Saunders asks what superhero fantasies can actually teach us about our larger conceptions of the human, the post-human,... Read more