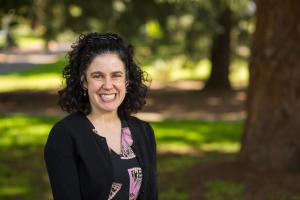 Alisa Freedman is a Professor of Japanese Literature, Cultural Studies, and Gender at the University of Oregon and Editor-in-Chief of the U.S.-Japan Women's Journal. Her books include Tokyo in Transit: Japanese Culture on the Rails and Road, Japan on American TV: Screaming Samurai Form Anime Clubs in the Land of the Lost, an annotated translation of Kawabata Yasunari’s The Scarlet Gang of Asakusa, and co-edited volumes on Modern Girls on the Go: Gender, Mobility, and Labor in Japan, and Introducing Japanese Popular Culture. She is writing a new book on Cold-War Coeds: The Untold Story of Japanese Women Sponsored by the U.S. Military and is helping to archive the personal stories of trailblazing women in Japanese Studies She has published more than twenty-five articles on Japanese modernism, Tokyo studies, educational exchange, study abroad, youth culture, gender, television, humor as social critique, teaching pedagogies, and digital media, along with publishing translations of Japanese literature. Alisa is the Faculty Fellow of Hamilton Hall and values her time spent working closely with students. She was the recipient of the University of Oregon 2016 Outstanding Faculty Advising Award, NACADA Award for Excellence in Faculty Advising (2017), and Excellence in Remote Teaching Award (2020 pandemic). Alisa enjoys presenting at cultural events like anime cons, TED talks, and Japan Festivals.

Introducing Japanese Popular Culture. Co-edited with Toby Slade. 40-chapter volume. (Routledge, 2017). Specifically designed for use on a range of undergraduate and graduate courses, Introducing Japanese Popular Culture is a comprehensive textbook offering an up-to-date overview of a wide variety of media forms. It uses particular case studies as a way into examining the broader themes in Japanese culture and provides a thorough analysis of the historical and contemporary trends that have shaped artistic production, as well as, politics, society, and economics. As a result, more than being a time capsule of influential trends, this book teaches enduring lessons about how popular culture reflects the societies that produce and consume it. Book website with teaching resources: http://www.routledgetextbooks.com/textbooks/9781138852105/default.php

Tokyo in Transit: Japanese Culture on the Rails and Road. (Stanford University Press, 2010). Using an approach that crosses the fields of history, literature, and cultural studies, this book explores the ways mass transportation changed Tokyo’s social fabric, giving rise to gender roles that have come to represent modern Japan. The world’s largest transport system, Tokyo trains and buses are social and cultural spaces different from other metropolitan commuter networks and provide a more distilled means of observing the effects of urbanization than other public places afford.

Modern Girls on the Go: Gender, Mobility, and Labor in Japan. Co-edited with Christine Yano and Laura Miller (Stanford University Press, 2013). This collection profiles women who worked in jobs related to notions of physical and social mobility. These women, often conspicuous in their uniforms, have influenced social roles, patterns of daily life, and Japan’s global image. They have been integral to the national workforce but have been overlooked by scholars.

"Some Atypical (and Charmingly Oddball) Suggestions for Creating Belonging and Community in the Remote Classroom." Co-authored with Julie Voelker-Morris. The Delta Kappa Gamma Bulletin: Collegial Exchange 87:4. 2021.

“Down in the Dumps: Tokyo Wastelands and Marginalized Groups in Japanese Film.”Japanese Visual Media: Politicizing the Screen, edited by Jennifer Coates and Eyal Ben-Ari. Forthcoming from Routledge in 2021.

“Death Note, Student Crimes, and the Power of Universities in the Global Spread of Manga,” In End of Cool Japan?: Ethical, Legal, and Cultural Challenges to Japanese Popular Culture. Edited by Mark McLelland. Routledge, 2016. Pages 31-50.

“Buildings and Urine: Modernist Nansensu Literature and the Absurdity of 1920s and 1930s Tokyo.” In Nonsense and Other Senses: Dysfunctional Communication and Regulated Absurdity in Literature. Edited by Elisabetta Tarantino and Carlo Caruso. Cambridge Scholars Press, 2009. Pages 237-257.

“How I Gained 100 Grandmothers: Inter-Generational Conversations in Oregon and Tokyo.” CSWS Annual Review 2020. Center for the Study of Women and Society, University of Oregon. Pages 26-27 and 29. https://csws.uoregon.edu/wp-content/uploads/2020/11/2020_CSWS_Annual_Rvw-FINAL.pdf

“The Forgotten Story of Japanese Women Who Studied in the United States, 1949-1966. CSWS Annual Review 2016. Center for the Study of Women and Society, University of Oregon. Pages 12-14. http://csws.uoregon.edu/wpcontent/docs/publications/2016_CSWS_Annual_Rvw.pdf

List of additional publications in English and Japanese can be provided.