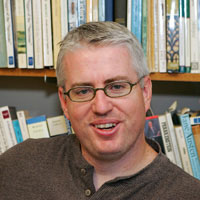 This course explores the writing and cultural history of a remarkably tumultuous and creative period—the first half of the twentieth century (1895-1945)—that in many ways bears a striking resemblance to our own time. Marked by a sense that the “old order” had passed away, the early twentieth century crackled with ideas and visions—exciting, frightening, revolutionary, and reactionary—about what might be possible in a new era. Looking at a range of writers, artists, and thinkers from the U.S., Britain, Ireland, Chile, Spain, and Italy, we will trace some of the key expressions of those ideas and consider how they shaped each other and the larger histories they inhabited.

Exploring a range of modernist writers, we will consider how the destruction of the First World War coincides with the unraveling of empire, new assertions of women’s rights on both sides of the Atlantic, and a radically new cultural and racial geography in the United States. We will examine the vigorous debates around immigration and civil liberties in the U.S. in the 1910s and 1920s and consider how they unfolded alongside the efflorescence of African-American art in the Harlem Renaissance to challenge and expand ideas of what it means to be “American.” Considering parallels to today, we will also examine artistic responses to the racist violence erupting in reaction to those changes. We will also explore the rise of Hollywood and cinema as a dramatically new technology and cultural form. We will reflect on what the emergence of cinema meant to people at the time and discuss how it provided the bases of a new culture industry that would have profound effects on the decades to follow. The second half of the course will trace the rise of fascism in the 1930s into the Second World War and consider the writing that emerged from that period alongside work that forms its legacy in later twentieth-century culture for Latino and Asian-American artists. We will look at a wide selection of novels, poems, stories, visual art, and film including Conrad, Owen, Larsen, Hughes, Yeats, Woolf, Yamada, West, Bowen, Neruda, Yamada, and Valdez.

Note: Please contact this professor directly for copies of the section syllabus