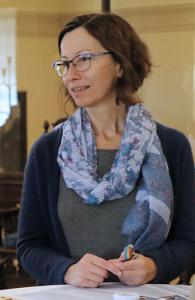 Aliens, monsters, killer robots, mutants.... Such metaphors may express cultural fears of the “other” that underlie social prejudice, intolerance, and discrimination. But viewers and fans may also read against the grain of normative cinematic images, finding identity and affirmation in the misunderstood and maligned. English 381 introduces students to critical thinking about the representation of  “otherness”

in speculative film and television media, including adaptations from comics. We will explore how binary structures of knowledge define social categories and how science fiction, fantasy adventure, horror, and superhero genres may simultaneously challenge and affirm what we “know”

Digital Humanities Minor courses integrate literary study with the use of digital tools and technologies. Students in the minor learn how to make interpretive arguments by building digital archives and maps, interacting with digital games, using web-based publishing platforms, and visualizing data. The minor pays particular attention to the culture of creation in literary and cultural analysis.